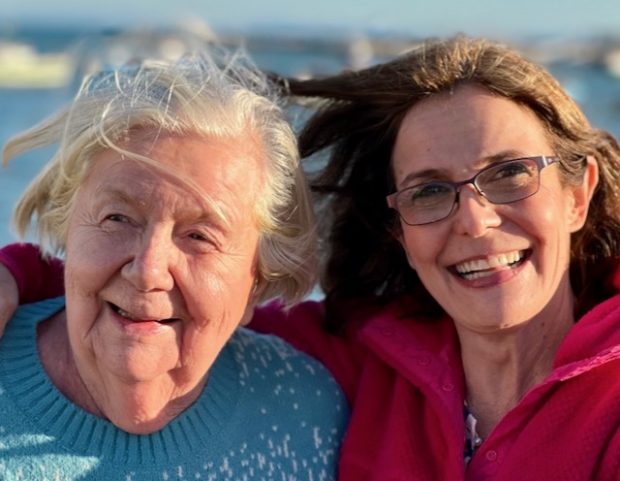 When Oakland Literacy Council board member and volunteer tutor Ann Manning was just 12, her mother, Jeanine Nazareth, did extensive volunteer work to launch and operate the nonprofit organization, Pittsburgh Public Theater. Jeanine remembers that Ann grew to share her mom’s passion for the project and was soon busily recruiting other kids to help stuff envelopes and distribute flyers.

Decades later, the tables have turned, and Ann is now the one enlisting Jeanine’s help for a cause close to her heart. Ann, who has served on the board since 2013, has helped her mother, who is now 81 and lives in Portugal, to become a one-on-one virtual tutor for an OLC student.

Ann says that her mom has always been engaged in the community, but the pandemic’s restrictions and some health challenges had combined to limit Jeanine’s activities. “She likes being out there helping people so much. It was hard for her to be increasingly confined and isolated,” Ann shares.

When OLC moved from in-person to online tutoring, Ann realized that technology could now make it possible for Jeanine to volunteer and engage with others without the challenge of needing to be physically present. Jeanine jumped at the opportunity, learned how to use Zoom, and was paired with a student, Milene, who has lived in the U.S. for four years and came to OLC seeking greater English fluency.

Jeanine finds helping a foreign-born student especially exciting because she herself is not a native English speaker. Born in Belgium, Jeanine grew up speaking French. As a young woman she taught herself English and, with her Portuguese husband, moved to the U.S. for his education. Upon arriving in America, Jeanine quickly learned that while she was adept at written English, she struggled greatly with pronunciation, and it took years for her to master spoken English. Today, she helps Milene, who immigrated from Brazil, hone her English-speaking skills and gain confidence.

“My student’s husband and children have made a point to join our Zoom lessons twice just to thank me and encourage Milene,” Jeanine shares. “They say, ‘Jeanine, you did a miracle with her! For four years she’s been trying but had no one to correct her pronunciation. Now she is starting to speak really well!’”

Jeanine applauds her student’s progress and shares in her success. “I get equal reward,” Jeanine states, referring to the fulfillment and purpose that volunteering brings her. Jeanine’s daughter, Ann, concurs: “Every opportunity I find to help people is a real gift to me,” she says, “I’m grateful that as a child, my mom showed me the value of contributing, and now I’ve passed that along to my own kids.”