Tutor Susan Lipson kept a scrapbook in high school, the pages filled with letters from pen pals in far- flung corners of the world who taught her about their cultures. 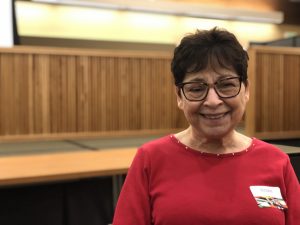 Susan often has two or three students assigned to her.

Now Susan learns about foreign lands through the students she tutors for Oakland Literacy Council. Since she became a tutor in 2000, she has had 14 students, most of them from abroad.

“I just feel I’m a globalist,” she says, referencing Socrates, who claimed not to be an Athenian or a Greek, but rather “a citizen of the world.” Tutoring gives her a way to experience other cultures.

She feels particularly drawn to the Japanese culture. One of the books that had a strong impact on her years ago was Hiroshima by John Hersey. Initially, she says, she felt a personal need to make amends for the United States’ bombing of Japan during World War II. “I’ve had such positive experiences with the Japanese,” she says. “They have an incredible work ethic. Tutoring them is a pleasure.”

She has tutored the wives of Japanese businessmen sent to Greater Detroit by their companies. Although the wives typically do not work outside their home, they still need to learn English, Susan points out. They must shop for the family, and they must communicate with their children’s teachers.

With Susan’s guidance, they become advocates for themselves and their families. For example, one student found her voice and protested when a grocery clerk overcharged her for a food item. Susan helped another student successfully navigate the educational channels to get special accommodations for her hearing-impaired child.

Susan retired from teaching high school English in 1999. The next year, she began tutoring for Oakland Literacy Council. She is one of the longest-serving tutors for the Council. “I love it,” she says. “The thing about teaching is that it never gets old. Lessons are never the same because the students are never the same.”

Susan often has two or three students assigned to her. She meets with them individually until they graduate from the Council’s program or until their husbands’ employers send them home. “It’s hard for me to say goodbye,” she says. “But then I turn my attention to the adults who are arriving here and need my help.”