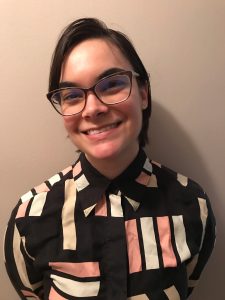 When people ask Megan Mulvaney what she does for a living, she has two answers: the full-time job for which she earns a salary and her volunteer work as a literacy tutor.

“Being a tutor is something that I’m proud of,” Megan says. “Communication is a gift, and I want to support that kind of learning.”

Megan is married to a librarian, and she holds a master’s degree in linguistics. Needless to say, literacy is important in her house. So, when she saw a flyer in the Ferndale Public Library from Oakland Literacy Council seeking tutors to help others master the English language, she didn’t hesitate to commit her time.

After completing the training program for new tutors, Megan was matched with a young woman who immigrated from China named Qi Qi who knew little English. In fact, the first time Megan called, Qi Qi hung up on her. Qi Qi assumed the caller had the wrong number because she didn’t speak English on the phone—to anyone.

Megan and Qi Qi went to work on the fundamentals of English, meeting weekly at public libraries near their homes. Like most tutors, Megan customized her lesson plans to meet Qi Qi’s personal needs. One of those early needs was navigating the automated phone trees of health insurers and other companies. At first, Megan helped Qi Qi make those complicated phone calls. But there came a time when Qi Qi no longer needed Megan’s assistance.

“I remember the first time she told me she could make phone calls herself,” Megan says. “That was great.”

Spending hours together forged a friendship. Sometimes, the women grab a meal together before or after their tutoring sessions. They teach each other about their respective cultures. Recently, while Qi Qi was in China on vacation, she reached out to Megan after reading a Chinese translation of Rachel Carson’s ground-breaking environmental text, Silent Spring. “We had a college-level discourse about the book in English,” Megan says. “It impressed me that, even when she’s on vacation, she’s still working on her English.”

After two years of tutoring, Megan has seen her student transform from quiet and shy into fun and creative. “It’s been really rewarding to see how much progress she’s made,” Megan says.