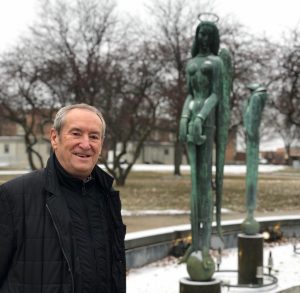 Bob Gaylor has been a tireless champion for Oakland Literacy Council since its founding in 1984.

The late First Lady Barbara Bush and Bob Gaylor. Without them, Oakland Literacy Council might not exist.

More than three decades ago, the former First Lady shared startling data about adult illiteracy at the American Library Association’s annual conference. Among those listening in the audience was Bob Gaylor, representing Oakland University’s Kresge Library. Bob found the data hard to believe. But back at home, conversations with others convinced him that even in a well-off county like ours, adults struggled to read and write.

Bob founded Oakland Literacy Council in 1984 in atiny office in Pontiac with one part-time employee and a $5,000 grant. Since then, Bob has been a tireless champion, serving on the council’s board and convincing others to support the council with their time, talent, and treasure.

In the early days, he pitched the council to the editor and publisher of The Oakland Press, then Bruce McIntyre. “I asked him to imagine that more than 100,000 residents couldn’t read his newspaper,” Bob recalls. Stunned, McIntyre wrote the council a generous check.

Later, Bob helped established The Motor City Food and Wine Festival to raise private funds for literacy programs in Wayne, Macomb, and Oakland Counties. He says, “We raised about $20,000” for programs in the tri-county area.

More recently, Bob has designated the Oakland Literacy Council as a major benefactor of his estate. “Next month, I’ll be 80,” he says. “I decided I should specify where my money goes. Although the council has served thousands of adults over the last 35 years, there’s more work to be done. I don’t think we’re ever going to be out of a job.”