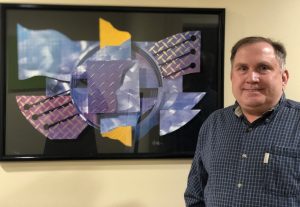 Eric worked for himself rather than an employer to hide the fact that he could not read well.

Eric has struggled with reading and writing since he was a child. He has a learning disorder called dyslexia, which makes it hard for students of normal intelligence to process words. Unfortunately, he didn’t receive enough specialized instruction; his schools simply “pushed me through.”

He was embarrassed. “I didn’t want anybody to know that I struggled so much with reading and writing,” he says. “That’s why I worked for myself.”

Eric picked up carpentry from his father, who did woodworking on the side, and started his own business as a carpenter. He refurbished kitchens, basements, and bathrooms. He also liked to do finish carpentry. Eric is really proud of the additions he built onto homes. Because his math skills were good, he got along with the carpenter’s adage to “measure twice, cut once.”

Still, he had to rely on family members to write invoices for him. Because he struggled to read and understand instructions that came with items he needed to install, he relied on his innate ability to visualize how something should be installed. Had he been a stronger reader, he might have been able to sit for the exam to get a full-fledged builder’s license, he says.

But Eric never lost his desire to read better. “I just always wanted to learn,” he says. He took a night class in reading near his home until the program closed. He hired a private tutor, but she quit. Although discouraged, he didn’t give up. Then he heard about Oakland Literacy Council, whose trained volunteer tutors provide individualized instruction for free.

“Eric is totally into learning for learning’s sake,” says his tutor, Alec.

His tutor, Alec, is a retired school principal who once taught fourth and fifth graders. Alec has useful techniques. He helped Eric create a spelling dictionary and stresses the importance of writing for a particular audience. Eric and Alec enjoyed the surprise endings in a collection of short stories by O. Henry that they read together, and they recently started the novel Wonder by R. J. Palacio.

“He’s had me write more than I ever have, so it’s getting easier for me,” Eric says. And reading is easier, too. “It’s getting to where I like to read.” One of his favorite reads so far: “My Life on the Mississippi” by Mark Twain.

“Eric is totally into learning for learning’s sake,” Alec says. Almost every single week since October, they have met at a library, where Eric works on building his vocabulary, spelling, writing, and reading fluency.

Eric says he once doubted his ability to learn, but no longer.

Read about the other 35 Faces of Literacy 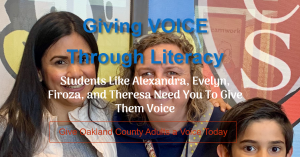