Galia Kozhuharova slipped a needle and thread through the hem of a pair of pants in her tiny tailor shop in Sterling Heights as she shared the story of her journey from Bulgaria to the United States.

It had been Galia and her husband Runen’s dream that their two sons enjoy a better life in the United States. The boys received scholarships to attend college in Michigan. After they graduated, they became business professionals and citizens. Then Galia and Runen followed their children to this country in late 2013. 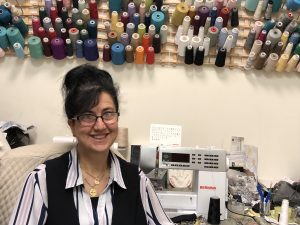 Galia lent a helping hand to another Oakland Literacy student by offering her part-time work in her shop.

When Galia and Runen arrived, they didn’t know English. Unlike their sons, they had not received instruction in English in school. But the couple was determined to learn the language, so they could live independently. Oakland Literacy Council found tutors who agreed to work with Galia and Runen at the same time and at the same place. Their English skills began to improve.

“I’m very thankful for the help Oakland Literacy gave us,” says Galia. “When we learn basic English, we can work with people.”

Although she was a college-educated math teacher in her native Bulgaria, Galia decided to draw upon the sewing skills she had learned from her mother to open a tailoring business. Her husband worked alongside her until he died last February. 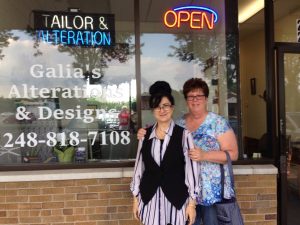 Galia’s former tutor, Pam, helps her out at Galia’s shop.

Galia has remained close to one of her tutors, Pam Williams, a retired math teacher who also enjoys sewing. Pam stops by Galia’s Alterations once or twice a week to help rip out seams and to chat. Pam’s husband, Ron, an architect, even remodeled Galia’s shop.

As her business grew, Galia has needed extra help. She thought she might lend a hand to another immigrant, so she returned to the Oakland Literacy Council to see if a current student needed a part-time job. Now a Council student from Poland works for Galia on Saturdays. “We help each other out,” she says. She would like to have a full-time helper.

Although the journey hasn’t been without some bumps, Galia is grateful to live in the United States close to her sons and her four grandchildren. And last January, she took an oath of citizenship.