A desire to test out his wings as a teacher led Ashton Hopkins to volunteer as a tutor for Oakland Literacy Council while still a student at Oakland University. The son of an immigrant, Ashton specifically wanted to help other adults learn English as a second language. 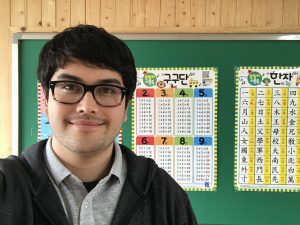 Ashton tutored students from Poland and Mexico for the Oakland Literacy Council before moving to South Korea.

Although Ashton’s mother had come to the United States in the 1970s from South Korea, she had worked so hard to learn English before he was born that Ashton never guessed she wasn’t a native speaker until she told him years later. “Her experience made me realize the dedication, uncertainty, and hardship people go through when they decide to or are forced to live in another country,” Ashton recalls.

With a bachelor’s degree in communications, Ashton already understood the importance of interpersonal and professional communication skills. The Council trained him to give those skills to English language learners. “The training at the OLC gave me a sound foundation,” Ashton says. “Along with the beginning orientation and supplied materials, the OLC offers many workshops. I was able to attend and learn firsthand from veteran ESL teachers about different methods of teaching and given many resources to create new activities for students. Before joining the OLC, I took a class to receive a TEFL (Teaching English as a Foreign Language) certification, and I can say nothing prepares you more for teaching than learning from veteran teachers and firsthand experience. The resources, training and experience through the OLC prepared me to tutor just as much, if not more, to assist student learning than my paid 100-hour TEFL class.”

After his training, Ashton was matched with a student from Poland, and later he took on a student from Mexico, too. “My proudest moments as a tutor were when I could sense that a student gained a little confidence,” he says. “The perseverance of students is very admirable.” 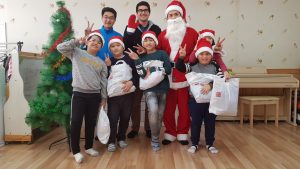 In addition to tutoring, Ashton facilitated a conversation group for English language learners. He found it “very interesting—and sometimes very humorous” to help the group members understand each other and share their interests and opinions.

Tutoring for the Council convinced Ashton he had some teaching chops after all. His next step was to go abroad in the fall of 2018—to his mother’s homeland, South Korea—to teach English to schoolchildren. “Being a tutor helped me get firsthand experience in planning a lesson and then totally adjusting it or changing it based on what problems might arise or when you see a teachable moment developing,” Ashton says. “Tutoring also helped me gain experience teaching to different levels of English proficiency.”

At the same time Ashton’s teaching Koreans to learn English, he’s making every effort to learn Korean. In fact, he says, his next step is to apply to graduate school in South Korea.