For years, Maurice carried around a heavy secret: he couldn’t read or write as well as he would have liked.

“I never got the attention I should have received in school,” he says now. “I was quiet. I didn’t cause problems. It was one of those situations where they just passed me along.” 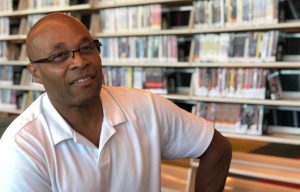 Maurice loves to read, despite having a reading disorder.

After high school, Maurice began a career as a heavy equipment operator, which required little reading or writing. When he did have to write schedules or directions for his job, he did the best he could. Penning a personal message for something like a birthday card was a challenge.

“I have accomplished a lot in my life,” he says, “but there was always something missing. . . I want to be a better writer, speller, reader.”

As an adult, he recognizes that he struggles with identifying letter sounds and putting those sounds together into words. The more he investigates his symptoms, the more he is convinced that he has dyslexia. This common learning disability is believed to stem from the brain’s difficulty in processing phonemes, the smallest units of speech.

Finally, in 2018, Maurice decided to get help. Because he had been battling leukemia, he had retired early from his job. He reached out to Oakland Literacy Council and received a free tutor.

During their lessons, they spend time on phonemic awareness, or the sounds made by letters. Maurice says he takes home about 20 new spelling words a week to study, and he takes a spelling test on them at his next lesson. Slowly, his vocabulary is expanding. Then he practices using the new vocabulary in writing.

Despite his trouble with words, Maurice says he loves to read. “For a person who has a reading problem, I love to read,” he says. Beth agrees. “He’s got a huge amount of curiosity, and he gets a lot of pleasure from reading.” He has particularly enjoyed a book Beth gave him called Stuff Matters: Exploring the Marvelous Materials That Shape our Man-Made World.

“Beth has helped me a lot,” Maurice says, “but it’s going to take more time” to gain proficiency. With his cancer in remission, he has the time. “I’m doing this for me,” he says. “It will make me happy.”