When Maher arrived in the United States five years ago from Syria, the only words he could say confidently in English were “hello” and “amazing.” 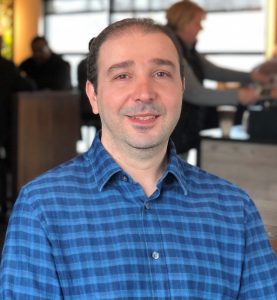 Maher hopes to find work as a bank teller.

Someday soon, however, he hopes to stand behind a bank counter and ask customers, “How can I help you?”

An estimated 5.7 million Syrians have fled the country since civil war began there in 2011, according to the UN High Commissioner for Refugees. Maher is one of those who left.

Back in 2014, the war in Syria made it all but impossible for Maher to continue his job in the finance department of a school. Many days, soldiers barricaded the streets. With his hometown increasingly unsafe, Maher applied for and received a VISA to visit his sister in Michigan. Initially, he hoped the conflict in Syria would subside, so he could return to Syria. However, as the war worsened, Maher decided to apply for asylum here in the United States.

Then he began the arduous task of rebuilding his life. He found part-time jobs stocking shelves at a gas station and prepping food at a Middle Eastern restaurant—low-pay jobs that required little English.

Maher knew he needed to improve his English skills to increase his employment prospects. He turned to Oakland Literacy Council, where he was matched with a tutor, Harry Manza, who also serves on the Council’s board of directors as treasurer. Week after week, they met to practice Maher’s reading, speaking, writing, and listening skills. Maher also enrolled in Troy’s adult education program to take an English-as-a-Second-Language class and another class to prepare immigrants for the world of work in the United States.

Since then, Maher has made steady progress. When he first came to Oakland Literacy Council, he could understand spoken English at the level of a first-grader. Now, his listening skills are beyond ninth grade, and he reads at an advanced level.

Maher is grateful to Harry for providing individualized instruction. He says he learned more than just English from Harry; he also learned about the American way of life and how to improve his job prospects.

As Maher’s English improved, he was able to move into the position of cashier at the gas station, interacting with customers. While working 40 hours a week, often on the night shift, he still continued to practice his English and began to dream about using his financial background to secure better-paying employment.

Like other tutors who go beyond teaching English, Harry referred Maher to workforce development agencies with whom Oakland Literacy Council has established partnerships. Maher took advantage of every opportunity that Harry suggested.

For example, Maher participated in a 12-hour class last summer designed by the Council and MichiganWorks! for English language learners interested in employment. The students practiced job-related conversation skills such as mock interviews, explored work-related training, and searched for jobs. While there, Maher learned more about the availability of jobs for bank tellers, and he saw a path forward for himself. 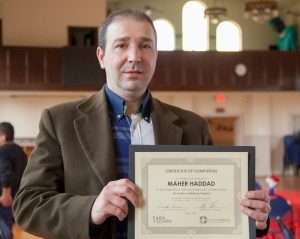 Maher followed that introductory course with others targeting banking-related skills. He took accounting-related courses through MichiganWorks and Walsh College, and he recently earned nationally recognized certificates in customer service and banking through training programs offered by Southwest Solutions, a nonprofit in Detroit. Many of the opportunities were coordinated by the Troy School District’s TRAC program.

“I’m excited,” Maher says, breaking into a smile. “I have enough English now to get back to my career. I can communicate with American people.”

“Everybody helped me here so much,” he adds. While Maher waits for resolution of his asylum case, he has a work permit and has started searching for a job as a bank teller.

Harry recently wrote a letter of recommendation for Maher. “Maher is a quality individual who I have come to admire and respect,” Harry wrote. “I have no doubt he will be successful in whatever career he chooses, and he will be an asset to any company that hires him.”